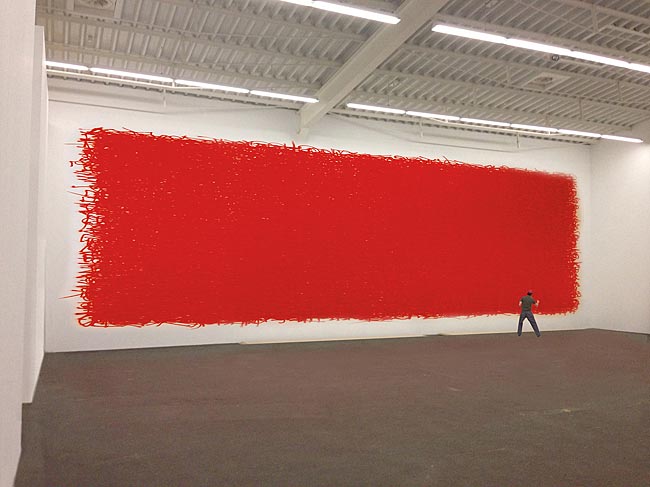 In the beginning was the wall. From the cave paintings of Lascaux to Leonardo Da Vinci’s LastSupperto the present day – the latest exhibition in the Riekhallen of the Hamburger Bahnhof places itself in the millennia-old tradition of mural painting and presents its artistic questioning since the 1960s.

With this exhibition, curator Gabriele Knapstein responds to the purchase of an extensive bundle of wall works by the Friends of the Nationalgalerie, which is now being presented in a first selection. Despite the kinship of the collected works, no real question can be developed in the exhibition concept that could ignite a critique. The examination of the wall permeates all currents of art production too stringently, from Minimal and Conceptual Art, to Arte Povera, to video art or postmodern practices. This is by no means intended to discredit the quality of the exhibition, but rather to make it clear that this is a collection of strong individual works that must be negotiated individually and in their context. The exhibition, which begins with spatial interventions by Donald Judd and ends with the performanceSomersault in Yves Klein Blauby Antonio Paucar, serves – apart from figurative painting – almost all enthusiasts.

I find the wall paintings by Friederike Feldmann, Katharina Grosse and Nasan Tur, created especially for the exhibition, particularly strong, which not only make an impression with their enormous dimensions. Feldmann irritates the viewer of her work by putting a pseudo-font on the wall, the illegibility of which only becomes apparent at second glance. Her semiotic play thus becomes an exciting perceptual experiment that poses a variety of questions about the symbolism of our time.

Nasan Tur also deals with the wall as a sign carrier, as it is understood and used in the urban context, especially by sprayers. Tur’s enormous wall work, which with its vibrating color surface initially seems to tie in with works of monochrome painting, includes a video that documents the creation process of the work. It shows how Tur slowly but steadily fills the wall surface with individual sayings and words that he has collected in the Berlin cityscape (“The fight continues”, No time. Only watches”, “penis”). The numerous lettering condenses and overlaps quickly, whereby they increase to a uniform pattern and the individual statement disappears in the mass. In Katharina Grosse’s work, the expansion of colour onto the wall has played a fundamental role for a long time.

For her current work, she had three mighty tree trunks and roots created in the exhibition space, which are connected to the wall by her typical explosions of color. The resulting, impressive aesthetics are composed of brutal pathos and painterly beauty.

As already explained, the exhibitionWall Worksoffers a museum insight into various art developments of the past 50 years due to its very general theme. Nowhere else in Berlin can this part of art history be traced and followed in such an impressive form. For the critic, the exhibition thus becomes an impregnable fortress, whose visit is recommended simply because of the prominent list of artists.