US-Stories, Castration and some more Desasters 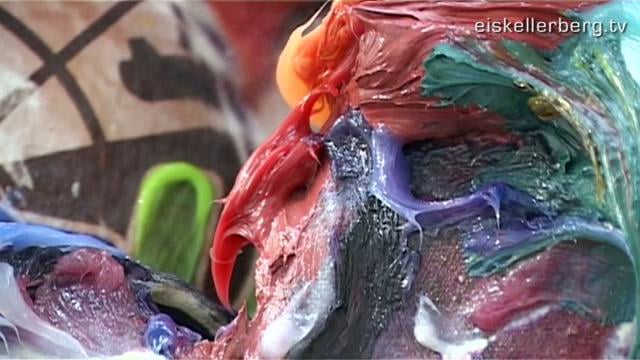 The invitation card (landscape format) is emblazoned with the victim of bestial torture. An erect penis lies there on a tray, the shaft of several credit cards intersected. “American Express” is written on one of the blood-stained, sharp-edged plastic cards that are in use worldwide. The imagination of the Argentine-American extreme painter Fabian Marcaccio, who was born in Rosario de Santa Fe in 1963 and moved to New York over twenty years ago, is extraordinarily drastic, mostly disgusting and repulsive. Recently, he has also taken up explosive political topics that get under your skin: They are all horror topics of his adopted home USA, as they have recently occurred: The Waco disaster in Texas, the mass suicide in Guyana ordered by Jim Jones, the Fallujah massacre, the student murders at the Columbine School or the Mexican drug war. These sudden outbursts of extreme violence not only represent the dark side of US history, they also contain a frightening explosiveness of the increasingly violent society of the only superpower. The painter laconically calls some USA Storieshis new series of 12 monumental works developed for the exhibition at Haus Esters. Dark, disgusting and repulsive at all. Scary stories. Marcaccio exhibitions demand a special portion ofcompassio from visitors. But rarely did one see a painterly work that develops more powerfully, ecstatically and also more magnificently than that of Fabian Marcaccio due to political entanglements and abysmal disasters. For despite all the burdensome thematic reference, he also brings his painting itself powerfully to effect. You can even enjoy these history hams as sensual, ecstatic paintingpure. It all depends on the distance: the horror images only gradually grow out of the thick color matter. Only from a proper distance can the explosive topics be guessed at and emerge as recognizable motifs. Very close to the pictures, you get a completely different experience. The shock painter Marcaccio is also a grandiose master of unfettered painting. “Self-portrayal of painting” is what Martin Hentschel, curator of the Krefeld show, calls it. Marcaccio treats nets made of hemp cords and nylon climbing ropes woven into them sometimes from the front, sometimes from the back with alkyd paints and silicone mass, allows the stark colors and slimy synthetic resins to penetrate into the coarse support structure or presses them through the net from behind. Monumental, relief-like images emerge which, in their passion and eruptive violence, respond to the brutal content, stand up to them. Fierce painting, indeed, that can easily compete with the most grandiose paintings of the Counter-Reformation. A picture hangs in Krefeld on the dark brick wall, outside to the terrace of the former industrial villa. “Erschießungskommando” is the name of this work. It is the only one in the series that does not explicitly refer to current US history. There were also firing squads in our country, also in Krefeld. The invitation card with the castrated penis comes from Duisburg. Raimund Stecker, also not squeamish, has chosen “Castration” as an inviting motif for his show “The Structural Canvas Paintants”. The director of the Lehmbruck Museum was a juror of the Bernhard Heiliger Prize for Sculpture in 2011 alongside Udo Kittelmann and Anda Rottenberg. Marcaccio received the prize. The Duisburg exhibition is a kind of takeover from the Georg Kolbe Museum in Berlin. After the delicate goldsmith’s pieces by Georg Hornemann, Fabian Marcaccio is followed by a completely different calibre, a painterly challenge in a class of its own. “Paintants” – as Marcaccio has recently called his hybrid painting, his by no means original word shrinkage of “painting” and “mutant” – merges the concepts of painting, sculpture and object art merge, which could also result in an indigestible, tough mass, were it not for the creation of those great figurative tableaux full of caustic political topicality in this fusion process. Globalization, bank crash, transsexuality, genetic engineering and terrorism are among them, as is the role of the media. “CNN-Paintant” shows, for example, a tattered CNN reporter lying on the ground, who is watching the (running?) Hold up the camera to take the last pictures. Infotainment, this mixture of sensationalism, violence and emotional overkill, flows into our visual everyday life, accustomes us to the palatable images and makes us equally numb. In contrast, Marcaccio’s “Paintants” act like a hello-awake drug. It was never again noticed that in the word “painting” there is also “pain”: pain, suffering, worry. Last message:
Well, yes. Stecker wants to keep
the Lehmbruck Museum openWhen Martin Hentschel and Raimund Stecker were still directors of art associations, one in Stuttgart and the other in Düsseldorf, they jointly organized the trend exhibition “Adventure of Painting” in 1995. Fabian Marcaccio was already represented at both stations at that time. The two curators fell out at the time and meet again today as directors of important museums in the Rhineland. The parallel Marcaccio exhibitions in Haus Esters and the Lehmbruck Museum, a few 18 kilometres apart, came about rather by chance. And then, startled by the Love Parade disaster, Duisburg supervisory officials almost did not do so again. The Duisburg museum was closed without further ado because railings and plexiglass panels under the museum ceiling were not necessarily considered safe. But Raimund Stecker does not want to join “the lament of the Duisburg building supervision” and “definitely try” to open the exhibition as announced.

Thanks to Fabian Marcaccio for the sketch about the structural disaster in the Lehmbruck Museum and to Eike Dürrfeld, Galerie Thomas Schulte, Berlin, for the great support. Thanks also to Ilka Tödt, Berlin and DOP Johannes Obermeier, Berlin.