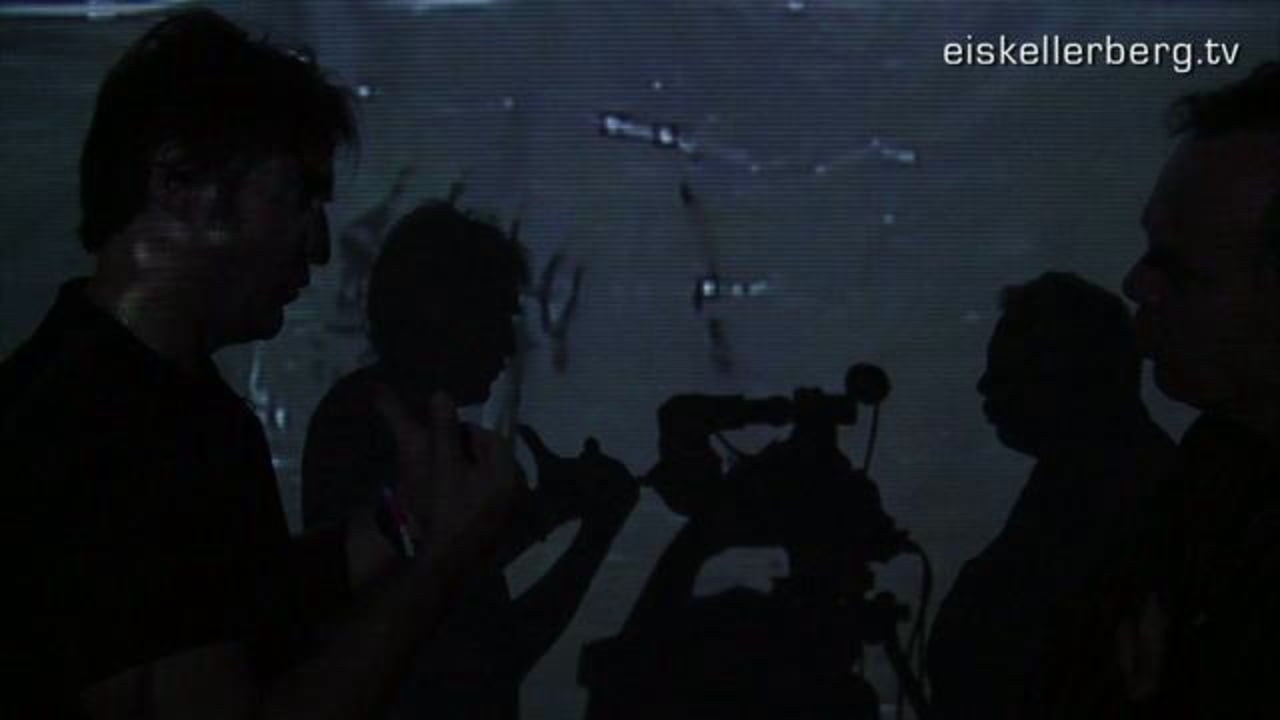 Projector, tape and silver foil –Mischa Kuball’snew video installationPlaton’s Mirror consists ofonly three components and yet wants to unhinge a foundation of our thoughts and actions, the distinction between right and wrong. After all, a dualism on which our world is fundamentally built: the separation of the world into a sphere of deception and illusion and one of truth and reality.

Plato’s allegory of the cave, written 2380 years ago, described the delusion of the bound cave dwellers who consider the shadow images to be reality for life. One breaks out and has to painfully realize that he has only seen the shadows of the real world. Those in the cave do not believe him and are willing to kill anyone who delivers such confusing news.

Kuball delivers the other confusing message: Only our mistrust, that we are constantly deceiving ourselves and are hardly able to recognize the truth, creates the world of mirages that we fight in the name of truth. In any case, contempt for reality in favor of a world of ideas and ideals is not Kuball’s thing. He liberates the cave dwellers by perceiving their perception as equal reality. He also frees the art from its reputation of being deception and deception. In Kuball’s installation, people move freely in space. You can even look behind the foil and see the light source (the video projector). Only their movements set the foil in motion and the light reflected in this way playfully transforms the basement room into an art space. People are no longer prisoners, but free in their actions and movements. Your action is desired and an essential part of what is happening. They are not interpreters, but actors. In “Plato’s Mirror” we enter a stage, but there is no fixed plot, no play. Upon entering the room, an open process begins, which can also be a reflection process of contemplative self-perception: the perception of the perception of perception becomes possible.

“No one has illuminated the political and social position of light better than Kuball,” writes Peter Weibel about the exhibition tour “… in progress”, which in 2007 led from theZKM in Karlsruhethrough 14 international art institutions to Tokyo and Beijing. “He does not travel forward with the ray of light into a seemingly bright future, but he makes a journey through time in reverse, he travels with the light back into the darkness of history. [ … ] He brings to light what no one wanted and wants to see anymore.” With the medium of light in all its possibilities and developments (commercially available light bulbs, LEDs, video projections, etc.) he pursues “lighting policy”.

Nevertheless, it is difficult to call Kuball, who was born in Düsseldorf in 1959, a “light artist”. He is not a painter of light like Dan Flavin or James Turell. Kuball is a conceptual artist who uses the simplest means to achieve a lot. His standards are high. With his work, he aims to change our perception, especially where everything seems to be determined: in public space.
“I’m interested in the process – or as I once put it, in the public as a laboratory.” For over thirty years, Kuball has built up a unique position beyond the art market. Ihor Holubizky coined the formula of the “Citizen Kuball”. He creates situations for critical reflection and sharpening of our perception – but precisely not to separate supposed shadow plays (art) from a supposed truth (reality).

Kuball’s mostly site-specific and site-specific approach continues afterPublic Preposition No.1 “Intervento” (Biennale di Venezia 2009) andNo. 2 “Marfa Floater” (Arist in Residence of the Chinati Foundation) at the firstBiennial of International Light Art. As part of “Open light in private space” (28 March to 27 May in the eastern Ruhr area), Kuball will carry out an intervention in the rooms of Sabine and Klaus Berndsen from Unna. In the therapy room of the two speech therapists, a rotating light projection will stimulate “the nerve cortex in the brain”.

Mischa Kuball will interview 108 families from 108 nations from the Ruhr area for the archive “100 Lights/100 Faces“. In exchange for a floor lamp, he will document her personal history. (From October at Ruhr Uni Bochum)

“Catch as catch can” is the title of another collaboration with the New York conceptual artist Lawrence Weiner at the wastewater treatment plant in Bottrop-Ebel as part ofEmscherkunst 2010. The curator is Florian Matzner.

The Bundeskunsthalle Bonn is planning a new exhibition series on media art with Mischa Kuball. The openings will coincide with the openings of the major exhibitions.

Kuball, Professor of Media Art at the ZKM from 2004 to 2008, moved to theAcademy of Media Arts in Colognein 2008, where he founded the experimental laboratoryMinusEins with his students.