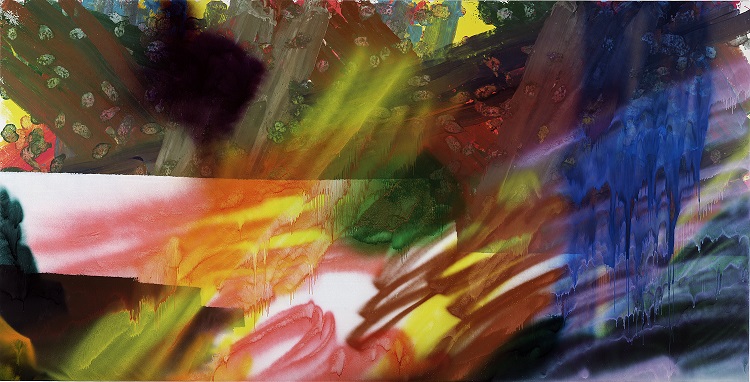 There is a lot of tradition and the splendour of past high culture attached to the painting. What can still save them? If there is anyone among contemporary artists who deals freely and offensively, demanding and mercilessly challenging with antiquated painting, then Katharina Grosse. She has been jumping quite relentlessly for 25 years and now ends up rudely in the Museum Kunstpalast.

She freed the two approximately equally sized halls on the upper floor from all fixtures, partition walls, ceilings, etc., until two hangar-like exhibition halls, each a good 800 square meters in size, remained. In the middle the staircase. But how differently the painter, who lives in Berlin and grew up in Bochum (“I come from the Ruhr area, where the German informal was strongly represented.”), used these huge halls in Düsseldorf! In the hall on the right, only eight canvas paintings are emblazoned on the otherwise bare walls, while the left one has been transformed into a walk-in color space landscape or better color rush landscape. In the alternation of the two wings, one could well speak of a dialogue between the two fields of great work, the panel paintings and the room installations. But that would take the tension out of the matter. It is about expansion and opposition, about confrontation and self-overcoming painting. Only in this way does the whole range of the current debate about painting become clear and that of the work Grosses zu dazu.

The eight canvases in one hall are a shock in themselves. Up to 36 square meters in size, each a storm of color in itself, explosive and monumental, overwhelming and sublime at the same time, you feel abruptly exposed to these XXL canvases. No escape. Involuntarily one feels overwhelmed, succumbs to a hallucinatory experience. The visitor has to paint the sails: impossible to escape the pictures of Katharina Grosse! The critic consoles herself: after all, the artist achieves such an effect due to a reflection on painting. Like hardly any other artist, she participates in theoretical discussions about painting, its traditions, prerequisites and conditions. Part of the Düsseldorf show will be a painting symposium with leading painting experts (Dec. 8).

The hall opposite, on the other hand, has transformed it into a color cave. If you want, you can wander around in it and marvel at building blocks, creep yourself in the apocalyptic scenery or put yourself in the most beautiful color watchful dreams. It is a walkable picture, a hallucinatory landscape with hills, valleys and paths in between. “Room painting” and material battle of 3000 square meters of canvas fabric, 40 cubic meters of earth and polystyrene rocks.

How the heavily used spray paint behaves on the different surfaces is of interest to Grosse again and again and at the same time recalls landscapes of the Romanticism of Capar David Friedrich, or Land Art of Robert Smithon, Michal Heizer and Walter de Maria.

This “earth space” is the hit of the Düsseldorf show, visitors queue up and become part of this spectacular color spaceen passant. The color, however, wears off over the course of the runtime. Dissolution of painting and uncharted territory. Nice idea: The multicolored footprints carry through the museum, further out through the Hofgarten and into the city, stopping for a moment inside the “Ehrenhof” at the “Ellipse”, which Grosse has mounted on the outer façade of the exhibition building.

Katharina Grosse pursues her path of the liberation of painting with seltner consistency. The radical formlessness, the layering of colors, the blurring and gradients, the clarification of the inner-pictorial space, the performative character, the iridescent colorfulness – she has presented all this in recent years thoughtfully and furiously, playfully and profoundly. The attack on painting with the means of painting has achieved a vehemence and dynamism with Katharina Grosse that we hold our breath before her pictures and experience her painting as liberation or frightening.

Is the walk-in color space the enhancement and expansion of the painting shown next door in the canvas hall? Or a dead end, because painting is hopelessly inferior to the possibilities of entertainment technology? Is it renewal of land art or installation art using spray paint? Grosse is immensely interested in such a question: “The border is an invitation.”

Because Grosse conducts experimental basic research, “analytical painting” as she calls it: How does color become an image? Or extended: How does color hit which substrate in which consistency and with what pressure? What happens in the air between the painter and the painting grounds? These are some of the questions asked by painting researcher Grosse, who greatly appreciates the tradition of painting in order to make it fruitful for herself: “In addition, painting is a fantastically old medium.” This is the case with spraying: The paint is formed into small balls with a lot of compressed air, which burst on the wall. This creates a new picture. “It is,” enthuses Grosse, “as if there were a large cloud of color in the room, which was depicted on the wall as if by a printing process.” Be sure to get on board!